We are offering discounts on immediate job bookings, including exterior painting, pressure washing and deck refinishing services- which all include work outside, not in your home.

I'm property manager here, and in the first encounter I had with Mark I was dissatisfied with him and I told him so. We didn't agree on certain things. Once he convinced me it was worth my while to start with him, because of the price primarily, I was watching (I'm an on-site property manager) his crews work on building number 5, just keeping track of them and what they were doing. Later that week I saw that they were working on building 5 again. I stopped them and talked to guy in charge. "I thought I saw you guys working on building 5." He said. "We did do that, but Mark (on his own) saw the place and wasn't satisfied with how it turned out, so he asked us to do it in again. That solidified him as a guy who was honest and going to do the best job he could do.
Chris & Tony B. of East Haven, CT
Wednesday, December 12th
I really appreciate the professionalism of the supervisor and painters.  They paid attention to every detail.  They were extremely helpful and friendly with the homeowner and myself (Realtor).  I look forward to recommending them next time.  Thank you!
Emiliano N. of Norwalk, CT
Thursday, February 1st 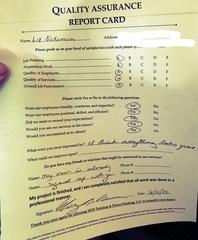 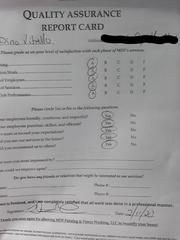 I'm happy with the work completed.
Dito V. of Bridgeport, CT
Wednesday, February 19th
Bill and I would like to thank you for the painting job that your guys recently completed on our condo. It looks great. The crew that did the job was very nice and respectful. I am very pleased with the manner in which the job was completed.
Patty Macko & Bill Petrasy of Woodbridge, CT
Thursday, January 22nd
Great job! As a property developer, I will definitely do business with you again. You can certainly use me as a reference
Claire H. of New Haven, CT
Thursday, January 22nd 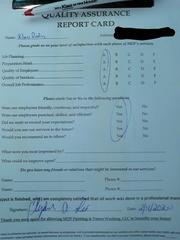 I've worked with MDF Painting before, and I've already contracted another job with them! Love Mark and his painters!
Klaus R. of Windham, CT
Thursday, February 6th
Total testimonials : 6

We serve the following areas